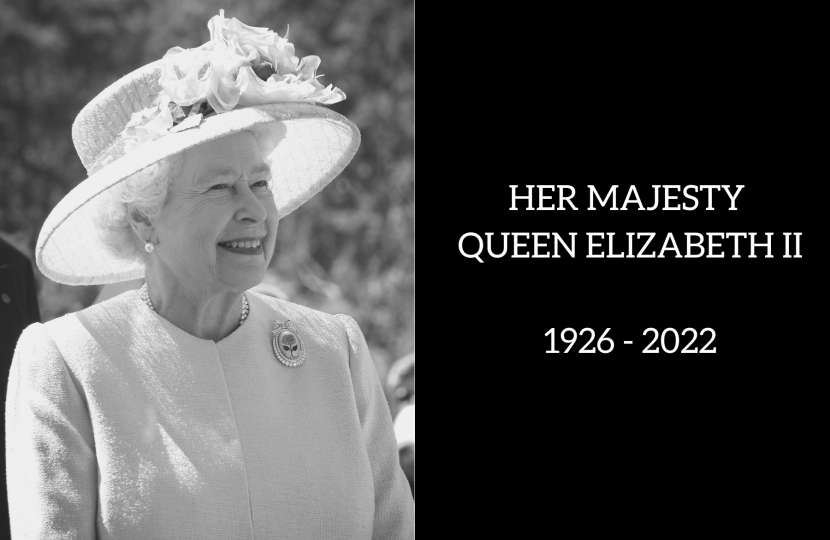 Hereford and South Herefordshire Conservative Association are saddened by the news of the death of Her Majesty Queen Elizabeth II.

Association chairman, Anthea McIntyre, CBE said: "The saddest of days, it is hard to believe that the Queen has left this world. She has been such a constant presence in all our lives and provided stability and unity to our country. What a wonderful example of public service she has given us."

A statement has been made by Prime Minister Liz Truss (link and full text below).

We are all devastated by the news we have just heard from Balmoral.

The death of Her Majesty The Queen is a huge shock to the nation and to the world.

Queen Elizabeth II was the rock on which modern Britain was built.

Our country has grown and flourished under her reign.

Britain is the great country it is today because of her.

She ascended the throne just after the Second World War.

She championed the development of the Commonwealth – from a small group of seven countries to a family of 56 nations spanning every continent of the world.

We are now a modern, thriving, dynamic nation.

Through thick and thin, Queen Elizabeth II provided us with the stability and the strength that we needed.

She was the very spirit of Great Britain – and that spirit will endure.

She has been our longest-ever reigning monarch.

It is an extraordinary achievement to have presided with such dignity and grace for 70 years.

Her life of service stretched beyond most of our living memories.

In return, she was loved and admired by the people in the United Kingdom and all around the world.

She has been a personal inspiration to me and to many Britons. Her devotion to duty is an example to us all.

Earlier this week, at 96, she remained determined to carry out her duties as she appointed me as her 15th Prime Minister.

Throughout her life she has visited more than 100 countries and she has touched the lives of millions around the world.

In the difficult days ahead, we will come together with our friends…

…across the United Kingdom, the Commonwealth and the world…

…to celebrate her extraordinary lifetime of service.

It is a day of great loss, but Queen Elizabeth II leaves a great legacy.

Today the Crown passes – as it is has done for more than a thousand years – to our new monarch, our new head of state:

With the King’s family, we mourn the loss of his mother.

And as we mourn, we must come together as a people to support him.

To help him bear the awesome responsibility that he now carries for us all.

We offer him our loyalty and devotion just as his mother devoted so much to so many for so long.

And with the passing of the second Elizabethan age, we usher in a new era in the magnificent history of our great country,

– exactly as Her Majesty would have wished –

by saying the words…

God save the King.

Our Plan for a Stronger Economy

Read about how our plan is tackling inflation and helping you with the cost of living.